Latest News  |  Actualidad  |  Ireland says “Yes, I do” to equality

Ireland says “Yes, I do” to equality 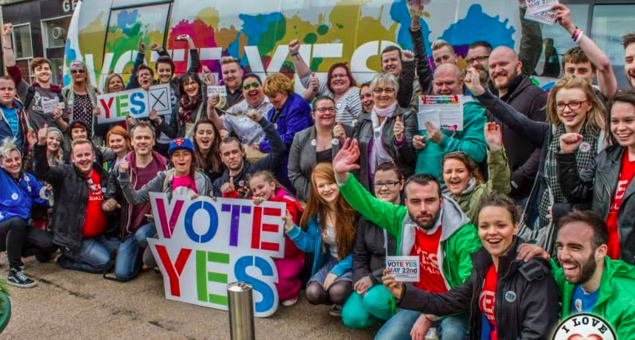 On the 22nd of May, Ireland became the first State of the world to legalize same-sex marriage by popular vote.

Irish citizens took part in one of the most historical moments related to freedom and democracy. The Government of Ireland celebrated a referendum to approve same-sex marriage. The results of the poll have shown a clearly victory for those who supported the gay marriage. The “yes” side scores 1.2 million of votes (62%). On the other hand, the “no” side gathered only 37% of the whole constituents. The gay marriage poll seems to have reach higher levels of turnouts than in other referendums in the country. According to RTÉ, also known as Ireland’s National Television and Radio Broadcaster, the total turnout was estimated between 50% and 60%.

Taking into account that around 82% of the Irish population is Catholic, the “good social rules” promoted by David Quinn’s speeches have set the mind of many Irish Catholics. In a result, the ‘no’ campaign appeals to the “right morality” linked to the traditional sexuality values.

The main dogma of the Catholic Church is love. Is not love enough to raise a child? Do gay people provide different love to children than heterosexual couples? In case of single mothers, are they not able to raise children properly by themselves?

Despite the efforts done by the Catholic church, the ‘yes’ side won. Same-sex marriage would be recognised by the Constitution by adding the following sentence: ‘Marriage may be contracted in accordance with law by two persons without distinction as to their sex.’

David Quinn tweeted the following post and congratulations to the ‘Yes’ campaign.

Until 1993, homosexuality was illegal and considered a criminal offense for the nation. Nowadays, same-gender marriage has only been legalised in 19 countries such as Mexico and United Kingdom. Gay marriage is only recognised in 37 States of the US. Gay people still being oppressed by narrowed minds. In some developing States like Mauritania, homosexuality is punished by death. In western culture, homosexuality is not condemned but gay people do not have the same rights as others do according to the Constitution. United States and Europe are presume to be the most liberal cultures. How is it possible that gay community is still facing bulling? How is it possible that LGBT community does not have the right to change legal gender, commercial surrogacy for gay couples and blood donations?

Irish gay marriage poll have led to people express their opinions regarding this controversial topic. Our team has interviewed James Chanon, who is an English men settled down in Madrid. James supports gay marriage but do not like children get involved. Also, he said: “I am white, straight British men. I respect when a black man or gay person complain about me. However, if I complain about a black or gay person I am racist or homophobic”. What do you think? Are we becoming more tolerant or do you support James’ ideology?