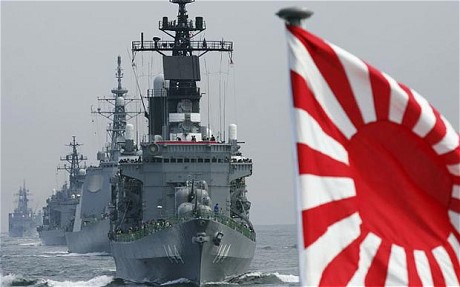 Japanese Government approved the largest defense budget in their history in response to the rise of Chinese military power.

Last Wednesday, 4th of February, it was approved by the Japanese Government the largest defense budget in Japan’s history.

The Japanese Government is going to spend 4,98 billion yen -36.000 million euros- in its defense budget, 2’98% more than last year. This would help Japan to reach position eighth of the world’s biggest defense spending country.

This is the third consecutive year in which the Japanese Government has increased its defense budget. However, this growth is still waiting for the approval of the Japanese Parliament. If this budget is approved, it will represent 5% of the national budget (2015).

The aim of this incensement of the defense budget is to strengthen aerial and maritime surveillance. They want to buy aerial surveillance aircraft and fighter jets to help the alertness system in some specific places of the country.

The Japanese constitution was born after the Second World War when the Allied forces occupied Japan. They considered that the new constitution should not let Japan have a military force to avoid any chance for this country to enter again into a war. This mandate can be seen in Article 9 of the Japanese Constitution of 1947, where it prohibits Japan to enter into a war and to maintain war potential, even though it does not specifically forbid self-defense military capability.

The policy of demilitarization of Japan changed when, for the sake of peacekeeping of the international community, it was allowed to increase its military potential only for self-defense purposes.

Article 9 has been very popular since the end of the Second World War, but it was not until recently that Japan has begun to take its security more seriously.

Japan’s rearmament is just a decision to face what the country believes that belong to them. In an Asian context: China is modernizing its navy and acting with growing assertiveness within territorial disputes –most of them tense relations within the China Sea- as well as challenging U.S. military access to Asia. Similarly, Vietnam and Indonesia are constantly growing.

Because of all that facts, Japan is just responding to Chinese behavior.

As a last issue, mention that China should rethink their own steps in order to contain not only India, Vietnam and US through the pearl necklace, but also to Japan itself.