An inside view of BrExit with Daniel Pruce 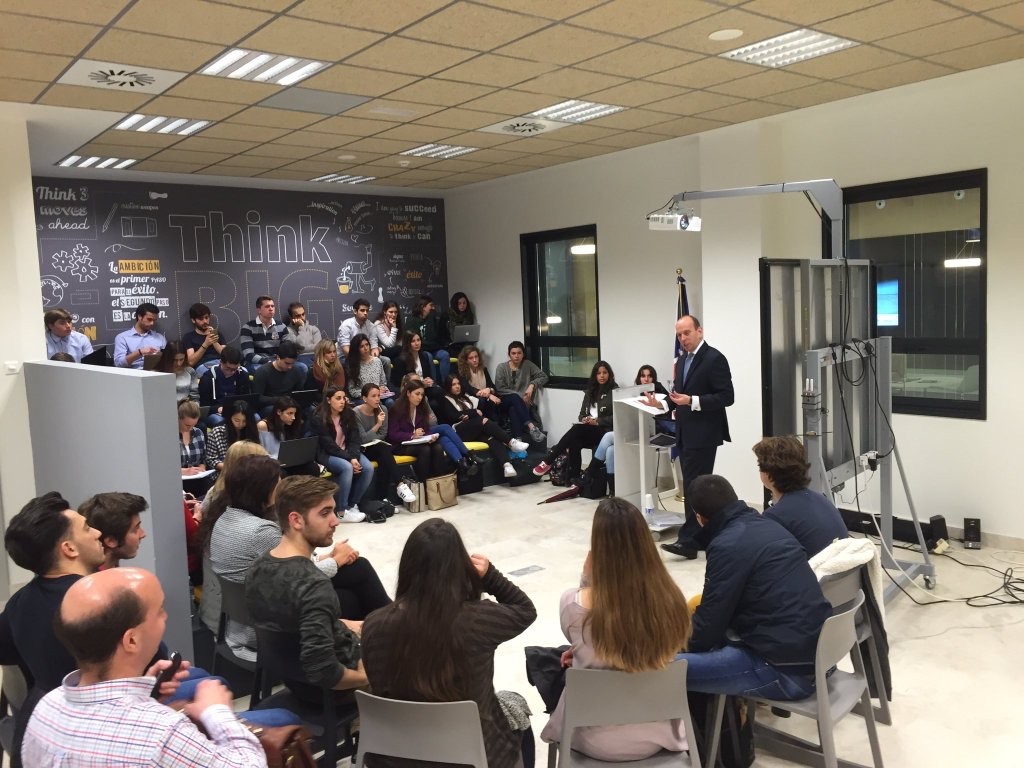 This June, there will be held a referendum vote in the UK on whether they should keep being a EU member, or if they should step out of the organization. This referendum vote goes by the name BrExit, a fusion of the words Britain and Exit. This has been a cause of debate and controversy inside and outside of the European Union, as even President Barack Obama of the United States joined the debate this weekend, saying that the UK should remain within the EU.

Universidad Europea de Madrid arranged in this occasion a talk with Daniel Pruce, the deputy head of mission of the English Embassy in Madrid, where we as students got the opportunity to learn about “the UK’s vision of a reformed EU”, BrExit and the official position of the British government, as well as we got the opportunity to ask questions about the topic.

With the title “The UK’s vision for a reformed EU” presented Pruce an explanation for the negotiations that British Prime Minister David Cameron have made with the other EU members. Pruce spoke in great detail about how Britain envisions the future of the EU, how it can improve and how the UK wants it to improve.

Pruce was clear when he said “the UK’s vision for a reformed EU is a positive one.” He spoke optimistically about solving the economic issues of the recession and youth unemployment that the EU is facing. Though he was very precise when he said “the EU got to change to remain relevant”, which we can agree is important in a constantly changing world. Especially with regard to the refugee crisis that is changing the political, economic and cultural nature of the European Union, as well as other countries affected. Pruce specified that the EU should do more in global issues like climate change, the Syrian war and the refugee crisis. Thoug many might argue that the UK also should do more when it comes to the refugee crisis and UK’s number of refugees accepted compared to Germany and Sweeden.

When specifying UK’s vision, Pruce focused on flexibility and diversity. As he said, and as it is reflected in the negotiations between the UK and the other EU.members, “not every problem the EU faces, is necessarily solved at a EU level.” This statement can be seen in the light of UK’s “fight” to take some of their sovereignty back from the EU. As I am someone who comes from the European non-EU country Norway, I have sympathy and understanding for this idea. Though the question, “isn’t it unfair for the other EU countries that the UK gets this special treatment”, arose from some of the spanish students. Pruce defended this stance by arguing that we are all a part of the same organization, and any other nation may also enter into negotiations to make changes within the EU benefiting themselves.

When speaking of the deal the UK made with the other EU countries last February, Pruce justified two important parts of the deal; foreign labour and the British Pound. If we focus on labour, we can see that It has generally been a concern for the British population that foreign workers from other EU countries comes to the UK, already highly educated, getting a job they are overqualified for, only to receive benefits from the British welfare system. This concern is one of the central conflicts that lead the population to want a referendum vote to determine the British people’s stand on EU-membership. It is generally a good sign the Prime Minister Cameron holds up to his promise from the last British parliamentary election. Though it can also be seen as a genius move on his side to use this referendum as leverage to gain a better “deal” with the other EU-members.

During the questionnaire at the end of Pruce’s talk, I brought up the question regarding the main consequences of a referendum in favor of a EU-leave. As Mr. Cameron also put it, Pruce said it would be “a leap in the dark”. Pruce went on to specify that the UK would have to create 27 new deals with the 27 other EU-members and that the EU would be in a completely unknown position, difficult to predict. It would therefore be safer to remain.

To extend my question, I later asked what the British government’s plan is if the referendum turns out to be in favor of a leave. Pruce explained that the government does not have an official plan for that, and that it would be the responsibility of the out campaign to argue what the benefits and solutions would be.

It is curious that a very competent government has no back-up plan, if everything goes south. Pruce specified that he is a government official, and must promote the government’s position. This of course being a very respectable and professional stand. Though I doubt that the British government has no plan B. “Uncertainty” being one of Mr. Cameron’s and the government’s main arguments not to leave EU, it would be untactical for the government to publish solutions for a referendum vote in favor to leave, as it would provide arguments to the out campaign.

To conclude from this, we can see that the British government has no intentions to leave the EU, but as the people wants something to change, that is what the UK gives them. The UK seems to have big plans to improve the EU, which we should consider to be a good thing. Change is not only necessarily, but good, because everything else is also changing. The UK are using tactical means to make some changes around, which in my opinion, is refreshing, in a time were nationalistic movements are on a rise. It will truly be interesting to see how this referendum vote goes.