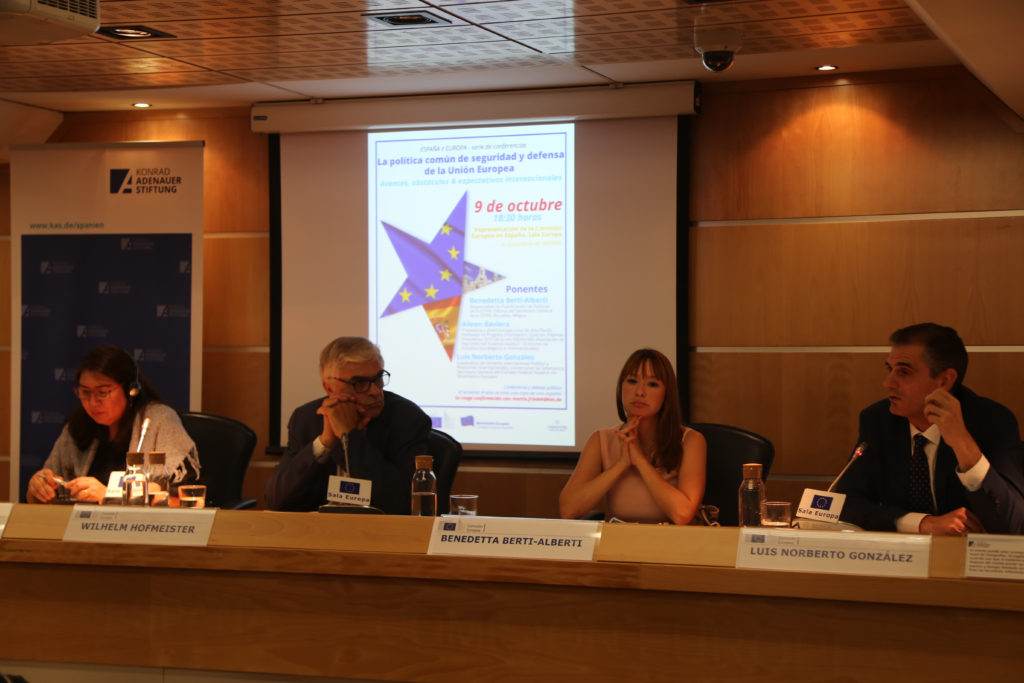 The conference about “The EU´s Common Security and Defense Policy: advances, obstacles and international expectations towards the EU” took place on October 9th in the European Commission in Madrid, Spain.  The conference was led by the Head of Policy Planning Unit, Benedetta Berti-Alberti, the President and Executive director of Asia Pacific Pathways to Progress Foundation, Aileen Baviera and the Professor at the University of Salamanca for International Public Law and International Relations, Luis Norberto González.

The first part of the conference was introduced by Bendetta Berti- Alberti where she talked about the transatlantic cooperation in matters of security and defense and highlighted the role of The United States and Europe with regard of the future of NATO. “Our mission is to defend Europe, but we cannot forget our neighbour countries” said Berti- Alberti during the conference. Furthermore, the EU has to focus on an international cooperation between Europe and the international society in order to strengthen the Common Security and Defence Policy.

Aileen Baviera led the second part of the conference where she discussed the international expectations placed on the EU matters of security and defense using the example of regional security cooperation in the South-East Asia. From the perspective of the relationship between South-East Asia and the United States the challenges are different due to the rise of China and the government of Xi Jinping. With other words, the security challenges are conventional and unconventional. Therefore, the EU has an important role when it comes to the relationship between China and the United States towards the challenges of the Common Security and Defense Policy.

The discussion on the deepening of EU common Security and Defense Policy and the current advances and obstacles was led by Luis Norberto González. As an expert in International Public Law and International Relations he introduced two main obstacles. The first one is the process of integration of the European Union from a security and defense perspective. In other words, the perspective of NATO. The second obstacle was the terms of cooperation between the member states and the rest of the international society. The political will of cooperation has specific characteristics, there are some member states that have more weights than other countries, such as the United States for example. The advances reached is the affirmation of the Common Security and Defense Policy by the member states.

The representatives concluded the main topic of conference by addressing the current and future security and defense needs of Europe. The EU is improving their ability to act as security provider, their strategic autonomy and their ability to cooperate with the international community.