Yeonmi Park, a journey to freedom 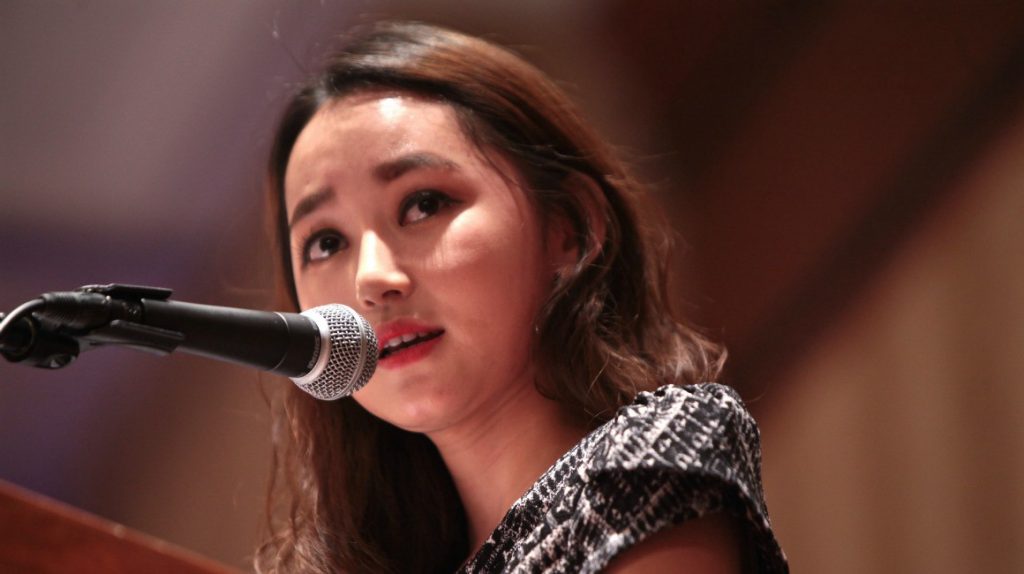 “This is not me only speaking, this is for all the people who want the world to listen” – Yeonmi Park inOne Young World 2014 Summit in Dublin.

Park Yeon-mi was born in  October  4th 1993 Heysan North Korea , she is a human rights activist and North Korean defector.

We all know her from her tremendous speech given back in 2014 at the worlds conference of One Young World in Dublin with over 50 million views in two days on YouTube and social media, with a current total of more than 80 million.

She comes from a politically connected and well educated family.  Her father was a civil servant who worked at the Hyesan town hall as part of the ruling Worker’s Party who  later established a metal smuggling operation in the capital, where he spent most of the year while his wife and daughters remained in Hyesan. Her mother was a nurse for the North Korean Army . Her family was wealthy by the countries standards during most of her childhood, although the family later struggled after her father was imprisoned for engaging in an illegal business and was sent to a labor camp for smuggling. The rest of her family was left to starve and faced horrible situations.

Her views of the Kim Dynasty changed  later when she watched an illegally imported DVD of the movie Titanic this caused her to realize the oppressive nature of her countrie’s  government. She states that the movie taught her the true meaning of love and gave her “a taste of freedom” — In order to live by Yeonmi Park

Not long after this, she saw one of her mom’s best friends being publicly executed and her crime was watching a hollywood movie.

When reunited with his family, Park’s father urged the family to plan their escape to China. So the family escaped the country by crossing the border into China, on the night of 30 March 2007, with the help of human traffickers, Yeonmi and her mother crossed a frozen river and three mountains to get into the Chinese border and her older sister  left for China earlyer, before they could without notifying them. Park and her mother headed for the Chinese province of Jilin, there they unsuccessfully found her sister, Eunmi, the asked  the traffickers about her whereabouts but nothing was known to Yeonmi and her mother  so finally they assumed that Eunmi had died.

One of the traffickers threatened to report Yeonmi and her mother to the authorities if she didn’t have sex with him, when her mother heard of it, she  intervened for Yoenmi’s safety by offering herself to the trafficker. In October 2007, Park sent word to her father and arranged to smuggle him into China. There, he was diagnosed with inoperable colon cancer. He eventually died “ I had to bury him in secret at 3 am, I couldn’t even cry, I was afraid to be sent back to north Korea” —Yeonmi One Young World Dublin

Park and her mother found a Christian shelter headed by Chinese and South Korean missionaries in  China. Due to the city’s large ethnic Korean population, they were able to evade the attention of authorities and with the help of the missionaries, they took a chance and fled to South Korea through Mongolia.

Yeonmi and her mother had difficulties adjusting to their new lives in South Korea, but they managed to find jobs as shop assistants and waitresses. She also continued her studying in  Dongguk University in Seoul. In April 2014, South Korean intelligence informed Park that her sister, Eunmi, had escaped to South Korea via China and Thailand. Park and her mother eventually reunited with Eunmi.

Ever since the escape, Yeonmi has written and spoken publicly about her life in North Korea. To help,  she has written for the Washington Post , and has been interviewed by the Guardian she  volunteers for activist programs such as the Freedom Factory Corporation, She also became a member of a nonprofit organization that rescues North Korean refugees hiding in China and resettling them to South Korea and the United States.

Park believes that change might occur in North Korea as long as she and the other North Korean defectors continue to be an advocate for human rights in North Korea. According to the National Review, Park presumes that, “the regime adjusts, as the Chinese Communists and the Vietnamese Communists have done. That would allow the North Korean Communists to hang on for untold years longer,”