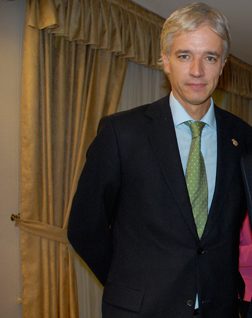 Mr. Velo de Antelo is an editor and at the same time is one of the most significant actors of the diplomatic studies and information in our country. He has recently met the King Felipe VI in Zarzuela  with a group of leaders and supporters of the Spanish language worldwide. Mr. Velo de Antelo is the director of the prestigious magazine “Diplomacia” in which the main issues about the Spanish foreign policy are normally debated and clarified.

We had the pleasure to interview him. He talked about different issues concerned to the Spanish foreign affairs. He believes that we are not going to see any important change; the challenges of the Spanish Foreign policy are similar as the ones of other European countries. Regarding climate change and environmental policies, Mr.Velo de Antelo, thinks that Spain is complying with its environmental duties but he remarked that the important task  is to pressure countries that don´t really care about the environment, like China.

In terms of the relation between Spain and US, Santiago Velo, thinks that there are important historic links between them and Spain must to work in this way. Gibraltar was other topic that he talked about, he expressed that the Brexit is the best opportunity to pressure Gibraltar. Finally, he mentioned the three pillars of the Council of Europe (Protection and promotion of Human Rights, the pluralistic democracies and the prevalence of law). He considered they are represented in the Spanish Government and its foreign policy.

With the new foreign affairs minister, we will see continuity of foreign policy. We are not going to see any important change. Margallo had a very important point: Gibraltar. Apparently, the new Dastis is not so keen on this “battle” but on the follow-up on the EU.

The main challenges are the Western ones , the same for Europe(euro, ISIS, refugees). We could say that challenges of the Spanish Foreing Policy are the same as the ones of other european countries.

Spain has a very impotant regional perspective: the Spanish speaking countries of Latin America. This is the most important region foreign policy for Spain. The King works a lot in this region. Second regional área is Northern Africa because Ceuta and Melilla.

Well, the Image of Spain will not be afected but other countries yes. Well and How will change the foreign policy? I don’t really know yet, because Trump´s administration has only 30 days, we need to give him 100 days at least to see what happens. We have to wait to see this new movements. Up to now there was this trouble with Mexico and the USA and it is true that Spain is part from the Ibero-American community but we have to wait to see if any of the movements will afect Spanish Foreign Policy

Brexit is the unique and very best opportunity to pressure Gibraltar. Spanish Government has already made a proposal to the British Government to accept a co-sovereignty, such as in Andorra.

When the Brexit is done, Gibraltar will be a foreign frontier, just like Morocco or Sudan.

Yes, well, I think that any government of any democratic country today supports human rights , pluralistic democracies and the prevalence of law, so certainly all the countries will follow what the council of europe promotes. This 3 pillars are represented now by the Spanish government  without doubt.

Well, it was 2 years ago that the king of Spain made a visit to US and it was a very important visit, because the king reminded about the historic links between Spain and US the first city in the US was founded by Spain . 3 quearters of today US belonged  to the Spaish empire,  Many cities have spanish names like Los Angeles, San Francisco…so I think Spain must work in this way, we must work as  axes of union between the spanish community which there are many many millions of spanic community which live in US administration and I think Trump is concious of this, he is being naming lately Spanic people for his government so I think he is concious about the necessity of having this people in his administration and I think this is a very good way for Spain  to work with the Trump Administration. On the other hand, economic relations I think that they wont suffer really like other latin speaking coutries like  Venezuela or agerntina, but I don’t think that will be any really cost for Spanish companies who work or want to work in USA.

Yes, I believe so. In fact in the last years there hasn’t been any terrorist attack here fortunately. I think in the last 4 or 5 years, Spain has detained 150 yihadist or possible terrorists while belgium has done it with 25 or 26 or france with 10. The police in Spain is very strict  and this measures are not been taking by other countries.So I believe measures taken by Spain are effectives. Now regarding Refugees, we are not reciveing a lot of refugees letssee what the features says. But Spain has terrorist history behind and the police know how to deal with them.

Well, Trump said that wanted to end with ISIS in 200 days, obviously this is imposible. Probably there will be a much controled distribution of arms to certain groups in order to became teerrorists groups and the foreign policy of US has always been the same since 100 years ago.  The USA always make the war outside its territory. Not even one bomb fell in USA territories and they fight the wars. In relation to trade he will success, he really is a business man so he will gain good economics profits.