Latest News  |  Actualidad  |  Informes  |  Últimos analisis  |  Professor Calduch: “Spain’s foreign policy has been based on a common understanding between PP and PSOE”

Professor Calduch: “Spain’s foreign policy has been based on a common understanding between PP and PSOE” 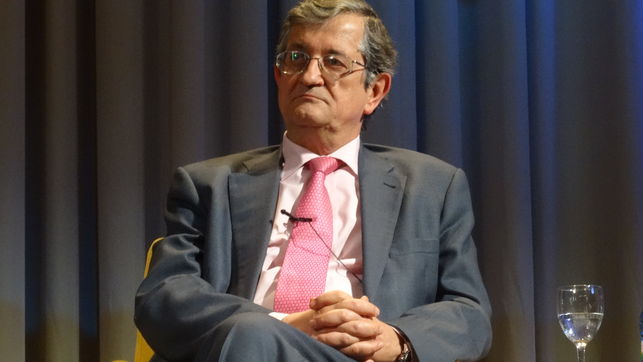 On March 1st 2017, as students of International Relations at Universidad Europea de Madrid, we were able to arrange a meeting with Prof. Calduch, a prestigious Spanish scholar known for his engagement in International Relations, Politics, Sociology and Law. The gathering was held in the Faculty of Political Sciences at Universidad Complutense de Madrid.

Aiming to obtain a deeper understanding on the public opinion concerning Spain´s foreign policy, we were welcomed by Calduch in a well-mannered and professional way. Throughout the in-depth interview, the atmosphere in the room became more and more relaxed. Each question answered by Prof. Calduch was followed by a sharp and clear reasoning. It seemed very easy for him to stablish a connection between his main ideas and built arguments.

Born on December 8th  1952 in Pedralba (Valencia), Calduch Cervera has a degree and a doctorate on Political and Economic Sciences specialised in International Studies by Universidad Complutense de Madrid. He is also licensed in High Military Studies by the Centro Superior de Estudios de la Defensa Nacional.

From May to October 2015, he occupied a post within the General Courts for Madrid as a Deputy. Currently he is an International Public Law and International Relations professor in the Faculty of Sciences of Information at Universidad Complutense de Madrid.

Furthermore, some honours or decorations worth mentioning are the Extraordinary Prize of Degree awarded to Prof. Calduch in 1975 and the White Distinctive Aeronautic Merit Cross granted to him in 2001.

The international community is currently facing numerous challenges: the wave of global migratory movements as a direct consequence of the Syrian War, causing the growing displacement of individuals; the counter-terrorism or Britain´s exit from the European Union (Brexit). Keeping in mind these issues which countries are having to tackle and administrate seeking maximum efficiency.

Q: What do you think we can expect from Spain´s foreign policy throughout this year 2017? What challenges do you believe Spain will face when developing its foreign policy?

A: The  Spanish Government will mainly centre its foreign policy in further developing initiatives regarding European integration processes, as the country is currently facing a period of political instability. It is true that the People´s Party has been elected once again after its first mandate, but it is relevant to mention that this second time it did not obtain the vast majority of the votes.

For the last forty years, Spain´s foreign policy has been based on a common understanding between the two major political parties, PSOE and PP, by agreement in vital aspects of Spain´s foreign policy and discrepancy in other minor matters. Nowadays, the context has changed, PSOE is experiencing a process of revision and internal modification, therefore it is not able to fully commit and support PP in its foreign policy development.

Q: Do you believe that the refugee crisis remains in first place within the international community when it comes to international issues or it has slowly lost importance due to the “sensationalism” of the media?

A: When it comes to the international community before the refugee crisis, it is important to understand that most of these individuals do not meet the requirements to acquire the status of refugee. The word “refugee” is continuously used incorrectly by the population and the media. The Convention on the Status of Refugees stablishes a series of requirements to distinguish refugees from those who are only migrating due to economic reasons rather than other life-threatening factors. Therefore, it is vital to study each case one by one to stablish whether or not they fulfil the Convention´s criteria.

It is difficult to determine if the media has a lack of knowledge regarding the status of the refugee or if it is simply ignoring its legal notions. As a result, the population has internalised a wrong and common belief that all individuals held in the borders are refugees. The truth is that not even a 15 % of these individuals are refugees. Due to the manipulation of the media the public opinion has been bias, hampering the European Union´s capacity to administrate the migratory crisis and creating a negative perception of refugees.

Q: A common point of view developed by the Spanish public opinion was that: “during the whole year in which Spain had no elected Government, no differences were noticed compared to other periods in which there was an elected Government”. Do you believe this to be true?

A: When there is no elected Government, it is possible to notice harsh differences compared to when there is an elected Government. In the case of Spain, the public was not able to perceive any noticeable changes throughout this year because the main matter concerning these changes was already arranged by the Spanish administration.

I participated in the draft and approval of the 2016 State´s budget in the year 2015 during the Tenth Legislature. It is clear that the process was precipitate, therefore, the Government was able to perform in accordance to the budget when no political party had been elected. On one hand, when no party has been elected it is impossible for a Government to arrange a budget, perform or even invest in matters such as: roads restoration or construction of any kind of infrastructure. On the other hand, expenses such as: electricity, water maintenance and personnel would be covered in accordance to the previous year´s budget. In a situation like this, the economic growth would decrease notoriously, damaging the country´s GDP.

Europe and the European Union

Europe currently stands before one of the greatest humanitarian challenges ever faced by the international community. As mentioned previously throughout the interview, the displacement of individuals due to life-threatening circumstances, pandemics or economic factors, has triggered a growing wave of migratory movements at a global scale. States are having to develop new protocols in order to process the arrival of persons in Europe as the administration seems to be saturated and unable to perform efficiently.

Q: Do you believe that the measures carried out by the Spanish Government are sufficient to administrate the current migratory movements efficiently?

A: What the Spanish Government is doing is applying the Schengen Agreement to migrants, trying to avoid the massive entrance of individuals and saturation of internment facilities. Those who succeed crossing the Spanish border are put through a whole administrative procedure.

On one hand, illegal migrants are sent back to their country of origin or country from where they are trying to cross the border. And on the other hand, those who do obtain the status of refugee, are given a job; a regular domicile; children´s access to education and health. The problem is that this procedure is not carried out in a short period of time, it takes weeks or even months to study an individual´s case.

The Government´s administration must determine if the person´s life is really in danger, “specific danger” not “general danger”. For example, if there is a war being fought in a country, a person who does not live in the specific region where the war is taking place, they are not affected by a lifethreatening situation or “specific danger”. Some of these individuals do not have any documents to demonstrate their identity, therefore a whole process of investigation is assessed with the help of intelligence agencies. The proof that Spain is being efficient in this task, is that it has not yet suffered any terrorist attacks, taking as a reference the cases of France, Germany or Belgium.

Q: How do you think that the extended populist/extreme political movements around Europe will affect Spain´s foreign policy and image?

A: Populism is not a new phenomenon, it was originated from the overcrowding of the communication and the media. The populist speech is based on the idea of delivering a message in a very simple a concise way. Also, populism selects a certain kind of public to deliver its message, usually to a broad illiterate group of individuals. The messages sent by populist regimes are never elaborate and lack a deep understanding or explanation of the spread information.

If you were to deliver a message to a group of people that highly illiterate, the best option would be to resort to audio-visual resources. For example, it is common in the US to carry out political campaigns through the Internet, being able to reach a broader group of individuals, rather than targeting a smaller group of people. Donald Trump´s speech is very simplistic and this fact is showing now, as he is facing great problems when trying to comply with his political manifesto. His political campaign was based purely on empty promises that he is not able explain how he will carry out.

Since Donald Trump was elected as the new President of the United States, the international community and the public opinion has been filled with pessimism and concern. Trying to determine what effects will Donald Trump´s presidency have on international politics seems like a very broad and complex task.

Q: What do you think will be the nature of the relations between the United States and Spain from now on compared to the relations developed during Obama´s presidency?

A: Spain has decided to remain neutral before Trump´s election and not show any opposition to its presidency. The Spanish Government´s media-networking has helped to consolidate the idea that not all matters concerning Spain´s foreign policy are directly conditioned by Trump´s presidency, such as Spain´s and the European Union´s fight against terrorism.