Latest News  |  Actualidad  |  Portada  |  Universidad Europea  |  Joseph Mellott reiterates to Spain and the rest of the world: America is back (#coWeek21)

Joseph Mellott reiterates to Spain and the rest of the world: America is back (#coWeek21) 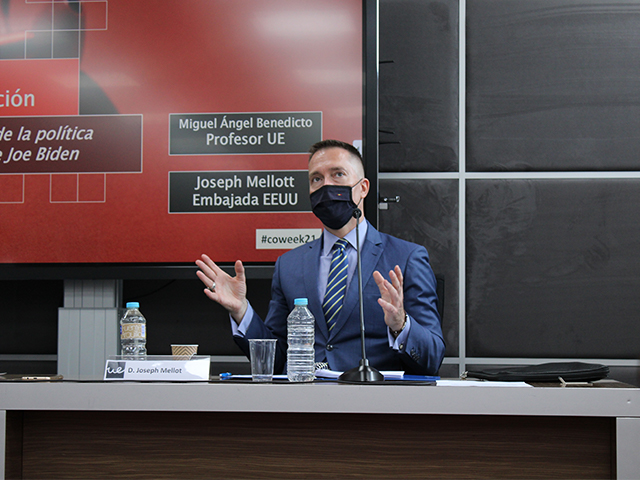 Just like President Joe Biden said a couple of months ago in Munich, his administration has made a return to foreign policy in order to make the world a more unified, equal and cooperative place.

The Public Diplomacy Counselor for the United States Embassy in Madrid, Joseph Mellot, was invited to the Universidad Europea in Villaviciosa to hold a masterclass focused on the challenges of Joe Biden’s foreign policy. His hour-long session touched base on topics of such importance as the China-Russia relations, the tackling of the Climate Change crisis, and the coronavirus pandemic. But, most importantly, Mellot provoked a feeling that had been cut off by the previous administration, the feeling of intent to promote global and inclusive progress.

Mellott was clear to say that multilateralism and the return to value-based diplomacy is the formula the Biden-Harris administration is intending to follow. “President Biden and his team have recognized from day one that there is a need to rebuild partnerships that have been damaged over the last four years so that together we can face and challenge global problems, not simply respond to them”, said Mellott. This sense of collaboration between the United States and the world was fueled by the american diplomat in order to establish one of the main pillars necessary to move forward with this administration. Even though he accepts that the previous government used language and set forward actions that provided a negative view regarding the U.S. – E.U. relations, he believes that most countries around the world feel a sense of relief due to the simple change of attitude by the hand of foreign policy. The return to the WHO, the return to the Human Rights Council, the return to the Paris Climate agreement and the continuation of the start of the nuclear deals with Russia and Iran are proof that the United States is ready to move onward.

“The partnership between Europe and the United States has been and must continue to be the cornerstone of everything we hope to accomplish in the 21st century, just as we did in the 20th century”, said Mellott. Due to the fact that the E.U. and the U.S. account for half of global gross domestic product, their focus to promote a better global trading system is expected from such leadership. But due to China’s recent economic behavior and the treatment of their ethnic minorities as well as Russia’s military assessments in Ukraine and their treatment of their political opposition, tariffs and actions have been set up by their closest partners such as the EU, Canada and the U.K. in order to promote accountability from a security, economical and societal.

“We need to precisely communicate our goals and core values in order to tell the real story of the United States to key audiences and in order to increase our mutual understanding of the world”, said Mellott. The american diplomat demanded a need for face-to-face interactions. Human to human interactions not only help with disinformation and ignorance, but they shape and have shaped diplomacy since its roots. Mellott was clear to communicate that the need of information literacy is just as necessary as economical tariffs, but the need of working together and understanding each other is even more crucial in order for all of these common goals of the free world to be conquered.